History of Grange Station - by Valerie King and Ann Read

Why did the railway come to be built through Crawley Down? This was a period of change and railway mania was sweeping the country touching virtually every aspect of Victorian life. A railway line to an area meant an increase in trade by providing faster and cheaper transport. By the mid-1850‘s, the main railway lines of England were either completed or authorised to be built, initially for goods traffic, but increasingly, the companies began to see the enormous potential of passenger business.

In 1845, the independent East Grinstead Railway Company was formed by a group of business men in the market town who feared isolation, subsequent loss of trade and a cattle market that could diminish in importance. Capital was raised through subscription, and the engineer, John Urpeth Rastrick made a survey of the proposed line with the intention of linking East Grinstead to the London, Brighton and South Coast Railway at Three Bridges near Crawley.

A subsequent survey was drawn up in 1852-3 by the engineer R. Jacomb Hood. This line "6 miles, 71 chains" in length was to pass through Crawley Down and Rowfant to the main line station at Three Bridges. A separate Act of Parliament was required to create each railway company and in June 1853, the Bill was taken before the Select Committee of the House of Lords. Earl de la Warr, a local land owner, was questioned as to whether he considered that it would be advantageous to the town of East Grinstead and to the country, to which he replied, "I consider without the slightest hesitation that it would be the very greatest advantage"

A contemporary newspaper, The Weald of Kent Mail and County Advertiser, reported that "It was a day of celebration and the speeches confirmed the optimism that the railway would, not only, "help the farmer to procure with much greater facility, chalk, lime, and manure for his land" but also that "by its construction the inhabitants of this part of the country would have great facilities of seeing absent and distant friends." The rail connection from East Grinstead to London and thus to the rest of the country and abroad, was the beginning of a new era for this rural community, and the line between East Grinstead and Three Bridges railway stations was in operation in 1855.

[Architect Drawing of Grange Road Station] This station building at Crawley Down was built in plain classical style and built to be seen in the village. It was originally named Grange Road Station and opened on the 2nd April 1860.

In 1963, Dr Richard Beeching published his report ‘The reshaping of British Railways‘. If a line could not prove to be cost effective, it was almost certainly destined to close. The Three Bridges-East Grinstead-Tunbridge Wells line was among the many proposed services to be withdrawn. It was a highly contentious decision, but in 1967, the line closed and for the first time in over one hundred years the communities along the line were to be without this service.

Without the early days of the railway, with the resulting trade and business ventures, it could be said that there would have been no prosperity in the area and no growth. The closure of the line and the demolition of the station brought further changes to the village and in many ways were far more reaching. The station was replaced by shops and car parking and the land surrounding it developed for housing.

The old track bed now peaceful and still, has been re-named the Worth Way and open for everyone to enjoy, It passes under the Victorian bridges that once witnessed the rush of steam and noise from the powerful locomotives, through spinneys and copses between East Grinstead and Three Bridges. 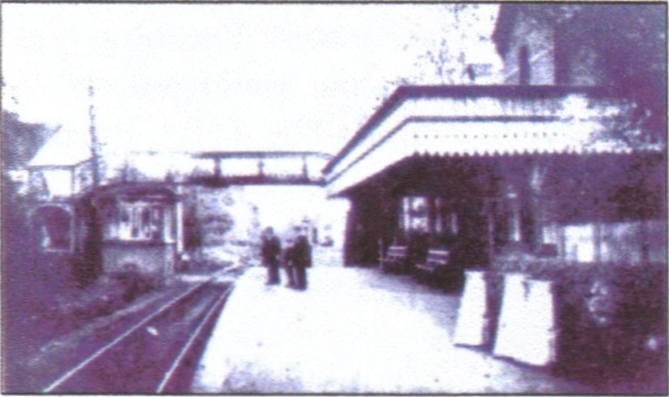