History of Crawley Down Park - by Jeremy Hodgkinson

Down Park, as it is more usually known, was advertised for sale in August 1877 as a ‘Modern Mansion (of Handsome Elevation) with all the Appointments of a Gentleman‘s Residence’. It had been built about ten years earlier following the sale of a collection of properties of which the principal element was Shepherds Hole Farm. This farm, which has since come to be known as Down Park Farm, had probably been built in the 17th century, and in 1865 was the property of Arthur Royds. Perhaps seeing the potential of his property as development land, following the opening of the Grange Road railway station at Crawley Down in 1860, Royds sold the farm to James Harrison, a barrister of Caterham, Surrey, who proceeded to have the mansion built. As the complete gentleman‘s estate would have included a full range of economic as well as recreational facilities, the farm was retained, and the property was laid out with gardens, both ornamental and kitchen, boating ponds, lodges, coach house and stables. The opportunity was taken to incorporate all the most up-to-date conveniences, such as partial central heating, water closets, a conservatory and a full range of discreetly located domestic servants‘ quarters. The kitchen garden, bounded by a brick wall, included greenhouses and vineries (also heated). The coach house had space for two coaches, together with stabling for four horses; and in one of the entrance lodges - they were at the ends of the two drives, in Sandy Lane and along the Turners Hill Road - there was a laundry where the household washing could be done.

Domestic service was an essential element in any respectable household in Victorian times and the censuses of the 19th century give us an idea of the degree to which this was taken in houses of the size of Down Park. In 1871, when the house was occupied by the family of Commander George Newcomen, a retired naval officer, there were no less than nine servants ‘living in’, not to mention a governess, compared to only six members of the family. These included a cook, two housemaids, a kitchen maid and a footman.

In 1878, the Down Park estate was sold. James Harrison, who had become MP for Kilmarnock Burghs in 1874, had mortgaged the property heavily, and the new owner was Dr George Gream, a retired physician, and his young wife (by 36 years), Ellen Gooch. Earlier in his career, Dr Gream, who had worked at Queen Charlotte‘s Lying-in Hospital, and had been a vociferous opponent of the use of chloroform during childbirth, believing it placed women at a moral risk during a particularly vulnerable time. His wife, the widow of Sir Edward Gooch, Bt., continued to use her former married name (benefiting socially by retaining the title, no doubt). Dr Gream sold the estate in 1882, to Lord Dunsany, but he and his wife continued to live there, presumably as tenants, for another five years, when it was occupied briefly by Edward Plunkett, 16th Lord Dunsany, of the Irish peerage. A retired admiral, he died in 1889, leaving Down Park to his son, Horace Curzon Plunkett, later to be a distinguished agricultural reformer and politician, who probably never set foot in the place as he was in Wyoming at the time.

The property was then owned by the Russell family until, in 1901, it came into the hands of William Graham Bradshaw, a banker. It remained in the Bradshaw family until 1959, when his widow died and the house was divided. 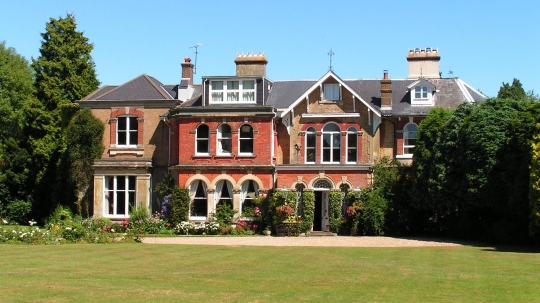