A grand Fete Champetre was held in the village in aid of the Building Fund for a Parish Room
In the summer of 1890 Mr Stanley William Redfern Russell opened his gardens to the public for two days; gardens on which he had just spent a significant amount of money. The event was described in the East Grinstead Courier at the time as;

“one of the loveliest spots in the neighbourhood and so well adapted for an open-air fete that anyone might be forgiven the thought that the grounds were laid out with such an object in view. Mr. Stanley Russell purchased the estate from the Hon. Horace Curzon Plunkett, the son of the late Lord Dunsany great alterations have been made in the house and pleasure gardens.”

The garden extension was carried out by a local company, Messrs. J. Cheal & Sons of Crawley. Two new tennis courts were laid down. The conservatory was described as ‘pretty’ with lovely flowering plants, and had several varieties of magnificent lilies on display.

To attract the right sort of visitor, an advertisement informed the readers that there would be “plenty of accommodation for horses and carriages on the ground”. Also, special railway fares had been arranged from neighbouring stations, with carriages meeting most trains at the station in Crawley Down to convey passengers to the fete at 6d per head.

In the event of rain, the Café Concerts and pastoral play would be performed in the ornate Victorian conservatory. Large marquees were provided in a field to view the racing and other sports. Fortunately the weather was good on both days and ladies were able to appear in the most “charming of summer costumes”.

Crawley Down must have been bustling with activity as it appears that hundreds of visitors attended the Fete. On each day, Mr. and Mrs. Russell entertained a large dinner party in the house. French seemed to be the order of the day, as it was reported that “the Fete went off with all the &eacuteclait which was foretold”. There were café chantants conducted a la Champs Elysees and, though described as wanting a few of the characteristics of the Parisian entertainments were, nevertheless, highly interesting and among the best of the many attractions.

“One of the free attractions of the fete was the Maypole Dance by children of the locality”. Dressed in Old English costume, they had been carefully trained by Canon Hodgson‘s daughters, the Misses Ethelred and Isobel. Their director was Master Willie Hussey, described as “a precocious lad who had ably mastered his part and who conducted the dance in a manner worthy of the highest praise”. With the maypole dance there was a little May Queen, May Towse, described as “sweetly pretty” and who graciously sat on her flowerbedecked throne. The band aided, by playing the popular air "Sir Roger de Coverley" and at the close of the performance, the dancers succeeded in collecting a considerable sum of money from the “delighted onlookers”. 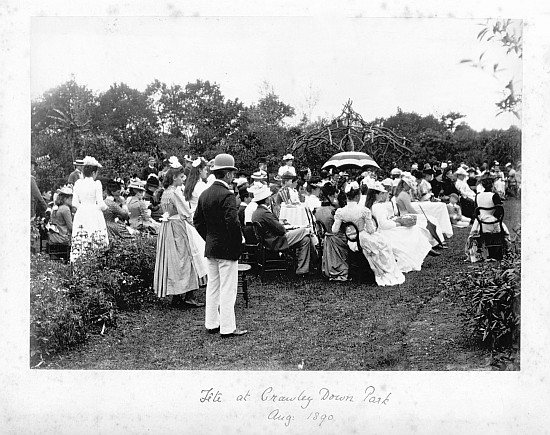 Fete at Crawley Down Park, August 1890

It seems that everything went to plan, and the concerts were a great success drawing large audiences with many comic and descriptive songs which were always met with a cordial reception. Mr. Arthur Pilleau‘s comic lectures and recitations were, as one young lady, a disciple of Oscar Wilde put it, “quite too awfully clever”. One of the most popular features on the second day was the “exceedingly clever exhibition of ventriloquial skill by Mr. John le Hay, a well-known adept in that particular profession.”

Just imagine the fluttering of young ladies‘ hearts at the appearance of the 14th (King‘s) Hussars when they played on the opening day! The 30-strong band was based in Brighton and would, no doubt, have arrived in the village by train, marching to some stirring music as they made their way through the village to Crawley Down Park. During the afternoon and evening, with the kind permission of the Colonel and officers they played a promenade concert in the pleasure gardens. On the second day it was the turn of the Horsham Town Band, who supplied an instrumental programme.

Music of an altogether different nature was provided in the form of a barrel organ, in charge of which was Mr. Charles le Breton Simmons. He was attended by a liveried servant who ground out tunes while Mr. Simmons made himself "affable to the ladies" and drew from them "stray pieces of silver and superfluous coppers" – probably twirling his moustache at the same time!

Two performances of "A Quaint Pastoral Play" were given each day in the open air theatre, described as "Grossmith‘s Absurdity, The Duke of Daggernought or The Gardener‘s Daughter" appears to be performed solely by Mr. Stanley Russell and his friends! However, it is pleasing to note that the chorus was made up of village children, and directed by Miss Isobel Hodgson.

It was reported that "it was doubtful if a crowd ever laughed more than did the crowds who witnessed the donkey races, when two cabbages, passed their prime, were offered as prizes". Gentlemen riders in fancy costumes took part and this event was followed by a "hunters jumping competition with owners up". Five horses were entered and the only gentleman who cleared everything three times in succession, and won the premier honours, was – yes you’ve guessed it – Mr Stanley Russell!

The steam circus was very popular, with steam roundabouts, swings and coconut alleys, attracting what was described as "the upper ten, who would not normally indulge in these exhilarating pastimes without fear of adverse criticism". The report of the Fete told of how good it was to see "divines, military gentlemen, holders of titles, dainty maidens and aristocratic dames, for once shaking off the reserve of their stations and thoroughly enjoying themselves on a wooden horse". There were pleasure boats on the lake, which was described as a "beautiful stretch of water" and if one wished one could be taken across to a ‘magic cave’ where a Miss Skottowe Parker, from the Floral Fete in London and dressed in gypsy costume "promised to receive ladies and gentlemen and to unfold to them their future, charging for her services as large a silver coin as her patronisers felt disposed to give."

So many activities had been organised that the planning must have been formidable. Aunt Sallies, itinerant musicians, refreshment tents and Mrs Cunnah kindly promised "to preside at the piano". Something for everybody – but at a price. Admission charges were staggered: Tuesday 2 - 5pm 2/6d or 2s if applied for in advance; 5 - 8.30pm 1/-d. Wednesday was a cheaper day: 2 - 5pm 1/-d and 5 - 8.30pm 6d. A significant amount of money in 1890. This may have precluded anybody other than the "influential gentlemen" and their families, effectively keeping the crowds away. Still quite a sum as an additional payment of 1s and 6d was then required for admittance to the play and 6d for admission to the concert by the 14th [King‘s] Hussars, and this included a seat. Both events were described as "a great success". Excellent tea and coffee was ‘luxuriously’ served in the rose garden, which had been turned into a theatre for the day for the Alfresco Cafe Concerts admittance to which was 1s. A flower and bon-bon stall described as being "charmingly decorated, plentifully stocked and ably managed", was situated under a spreading oak and it is reported that "none were safe from the tactics adopted to make money".

Mr. Russell gave everyone the opportunity of looking around the grounds of his home in Crawley Down Park and it was reported that "the inhabitants of Crawley Down as well as the strangers who patronised the Fete owe him a debt of gratitude". The total takings for the two days were about £100 and although it was hoped a good profit would remain, after meeting all the very heavy expenses, it appears in the contemporary accounts that £18. 8s. 6d. was received. It is interesting to note that the total cost of building and equipping the new Village Hall amounted to £449. 13s. 8d. br>

It is very doubtful if the working classes such as the local agricultural workers, the workers in the brick kilns and the young servants would have been able to afford the money for the entrance fee. The cheapest entry could have cost 6d. Unless special entry arrangements had been made, they and their families probably had to be content to watch the arrival of the Band of the Hussars in their splendid uniforms, the spectacle of the steam circus arriving in Crawley Down and all the comings and goings of the smart carriages. The sound of the music from the Fete would have drifted across the village for all to hear whether they could afford to go or not.

The Fete Champetre, in a small village like Crawley Down in 1890 was an amazing event. Enjoyed by many and never to be repeated, it helped raise some funds towards the building of a Village Hall – a hall which we are privileged to have the use of today. It seems that the Russell family sold the property around the turn of the century and sadly, it appears that Stanley William Russell died on 4th April 1905.