History of Crawley Down Health Centre - by Caroline Custard

Many things define a village community, the church, the school, local businesses and shops but most of all the villagers themselves. You could say that one of the things at its heart, bringing them all together, is its doctors and the health centre. I wanted to mark the ten years since the present Health Centre was opened with an article that charts how a village like ours has developed since the war, reflected by the changes in health provision.

After the war, Crawley Down had a population of less than 1000. A railway line ran from East Grinstead to Three Bridges that stopped at Grange Road station, Crawley Down.

In the early sixties, Doctors Palmer and Orcutt set up a practice, renting the Rosery, a detached house in Hophurst Lane. The Police House was a few doors along. Marguerite Riley lived in the house with her husband Barry and baby son Jason. She started by generally looking after the place for the doctors but eventually became receptionist, secretary and dispenser, sometimes balancing Jason on her hip as she worked.

The front room was the waiting room, the dining room the doctors‘ surgery. There was no appointment system; you just waited your turn because you knew you would eventually get seen. Sometimes the patients spilled onto the hall and stairs. If someone came in with a sick child, you would let them jump the queue. There were two daily surgeries morning and evening and you could ring the doctors on a Saturday morning at the surgery. Once surgery was finished, they did the home visits. The phone would be put through to their houses, and they would be on call evenings and weekends. Their wives would answer the phone and take messages if they were out. The doctors would always leave a list of phone numbers of the home visits, or their neighbours, if they didn‘t have a phone. Dr Orcutt would always call in to Wheadons Removals at Snow Hill when he was out on house visits. He‘d use their phone to call the surgery to pick up any new messages.

Babies were weighed by Gladys Rhodes at the Village Hall, with Peggy Holman and Shirley Donaldson assisting. Mums would take their big Silver Cross prams or pushchairs on the train or sometimes walk to the surgery in Crawley Down to get their babies vaccinated. Marg shared her fridge in the kitchen with the vaccines and medicines. Supplies for the dispensary were ordered on a daily basis from Dixons the chemist in East Grinstead and the doctors would pick them up on the way back from their daily visit to see patients who were in the Queen Vic. Ingrid Fisher and Valerie Gurney were the first two doctors to be trained at the surgery. The midwife lived in a house at the top of Sandy Lane. Sister Penrose, Penny, held ante-natal surgeries in the Village Hall. Dorothy Furnivall and Jean McLoughlin were district nurses/midwives for the surrounding community. The new Crawley Hospital opened in the early sixties and Crawley Down mums could go there to have their babies. There was a surgery in Turners Hill in the Free Church Hall and at West Hoathly in a garage at Gardenmead and later St Dunstans Chapel. Dr Orcutt also held a surgery at his house at Vinols Cross. During the bad winter of 62/63, Dr Orcutt slept on the sofa at the surgery as he couldn‘t get home 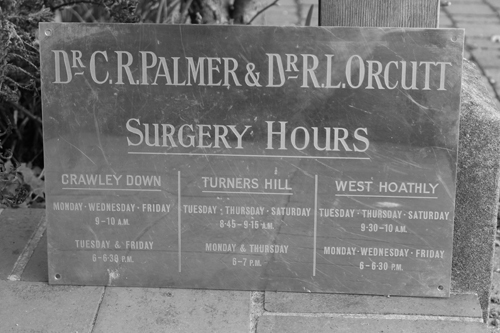